Here is an easy homemade passive diffuser that will cost you just a few dollars and a few minutes to make.  A while back, someone gave me a whole box of cinnamon sticks.  Since I already had cinnamon, they sat around for quite awhile and I no longer wanted to use them for cooking.  Meanwhile, my kids bathroom was smelling, er, unpleasant.  I decided to try using the cinnamon sticks as a passive diffuser.  I placed a few sticks in a jelly jar and put a few drops of essential oils over each one.  I like the smell of citrus and spice so I used some sweet orange, as well as a little cinnamon, and some litsea cubeba.

Over time, the cinnamon sticks lose some of their own scent so you could refresh these with anything but I think sticking to complimentary scents with cinnamon works best the first few weeks.  I have noticed that the sticks tend to become slightly less absorbent over time and so I plan to use up the rest of my box of cinnamon sticks by replacing the sticks in my impromptu diffuser every 6 weeks or so. You can buy a box of bulk cinnamon sticks at most grocery stores for a few dollars, and individual jelly jars at your local craft store. You could also use any other glass or pottery container you have lying around. If you use pottery, make sure it is waterproof as you don’t want the clay to absorb the essential oil and possibly seep through to your counter.  I do not advise plastic or metal as they might react with the essential oils.

Here’s a tip…in my last post I talked about safe disposal of essential oils.  When the oil in my glass nebulizing diffuser starts to thicken (after a few days) I use it to refresh this diffuser and place fresh oils in the nebulizer.  The oils in my homemade diffuser evaporate and I have no oils to dispose of! 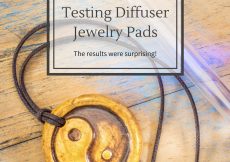